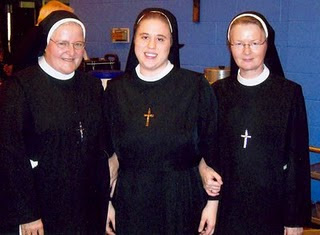 “Christ is calling you; the Church needs you; the Pope believes in you and he expects great things of you!” My life would never be the same as the words of John Paul II coursed through my mind and beat with fervor in my heart. Me? Could he possibly mean me? Like many others, I felt Pope John Paul II was speaking directly to me as I sat behind him in the nose-bleed section of the stadium in Saint Louis. Throughout my high school years after this encounter, the idea of having a possible vocation to the religious life shocked and bewildered me, but at the same time brought me such peace. As each year came and went, my relationship with Jesus Christ and His Church grew with greater depth, understanding, and love. Through daily mass, Eucharistic Adoration, the Rosary, Scripture and God’s divine intervention through his priests and religious, I soon realized that, yes, the Pope did mean me. Christ was calling me and how could I say no? After one year of college, I soon came to the realization that I could not hold back on God anymore. I entered the Sisters of Saint Francis of the Martyr Saint George in 2003, was received into the community as Sister M.Clementia (which is Latin for “mercy”) in 2004, and made my First Profession of Vows in 2006 into the hands of Reverend Mother Margaretha Maria, who was “stopping by” on her way back to Germany from Brazil.

Having Reverend Mother and her Vicaress, Sister M. Engratia, here with us again during this time of visitation (which, sadly, is now finished) has brought back the memory of that day when I offered myself to God through the vows of Poverty, Chastity, and Obedience, placing myself at the disposal of this religious congregation. As soon as I think back on that beautiful day of consecration, I automatically recall the path God chose to get me to this point. My vocation and the way in which God chose to reveal to me his love, mercy, and faithfulness is the daily strength, along with the ultimate source- the Eucharist- which allows me to persevere in both struggles and joys.

I will miss the presence of Reverend Mother and Sister M. Engratia, who have brought the fidelity of Mother M. Anselma, the joy of Saint Francis, and the prayerful spirit of our entire congregation with them to America. Most importantly, they have reminded each of us to be faithful to our vows and to live in utter gratitude for our vocation as Thuine Franciscans. May God bless them upon their return to Germany and may they take with them our love and prayers as gifts for our world-wide community.