Our adoption of this early martyr as one of our principal patron saints was a providential "accident." Our spirituality focuses on the Sacred Heart of Jesus, and the original name which we chose was "Sisters of Saint Francis of the Sacred Heart of Jesus," but another congregation had already adopted that name. Saint George was the patron saint of the parish church in which our Sisters lived and worked, and so, with a practicality that was native to Mother M. Anselma, we simply adopted him as our patron.

Very little is really known about Saint George. He was a Roman soldier, who left the army after his conversion to Christianity. He was later martyred. There is a beautiful legend about him, which accounts for most of the artistic representations one sees of him. It is said that there was a village terrorized by a dragon. The villagers would provide the dragon with victims in order to save the rest of the village. Saint George came to the village and did battle with the dragon, saving the young girl and freeing the village.

The image has a deep spiritual significance. The martyr of God does battle against the evil one, who is represented so frequently as a dragon, and frees the woman, a symbol of the Virgin Church.

In our day, when many cultural trends seem inspired by the forces of darkness, it is appropriate for us to have as our patron a fighter who does battle against evil and assists in the building up of the Church.

Saint George, pray for us! 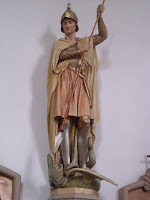