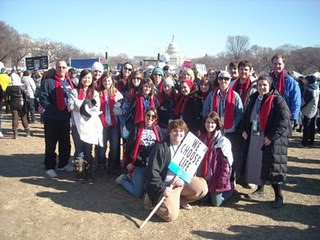 A week ago today I was scurrying around preparing to leave on a 15 hour bus ride with 20 members of my parish to participate in the 36th annual March for Life. I took a break in the packing action to make my weekly visits to the grade school. I decided to introduce them to the idea of the right to life with a little help from my friend, Dr. Seuss. I read them “Horton Hears a Who” which draws on the line “A person’s a person, no matter how small.” I told them that shortly after leaving their class, I would be going to Washington, D.C. to help make sure that the people who work there, especially our new president, knew that “A person’s a person no matter how small.” Those little ones got it, they believed it, and they couldn’t understand how anyone would question what Dr. Seuss says so plainly. One of them even suggested we send the book to our elected officials. Dr. Seuss aside, one would think that God’s word would weigh a little heavier and if that isn’t good enough, natural law stands well on its own, too.
Since November’s election results didn’t bode well for life, I knew that being in D.C. for this year’s March was particularly important, and when I arrived, my heart was filled with hope. FOCA may be looming its ugly head, President Obama may have reversed the Mexico City policy, but despite all of this, there is hope! There is hope in the nearly 300,000 mostly young people who swarmed the capital for the March to take a stand. There is hope in the thousands of seminarians who are preparing to preach the Gospel of Life and the priests and bishops already ordained who are faithfully proclaiming the dignity of every human person. There is hope in the young children on their parent’s shoulders, in strollers or baby backpacks who are being raised to value life from a young age. (Even the Pepsi advertisement I saw in the metro station reminded me of hope...not sure if their hope is the same as mine.) 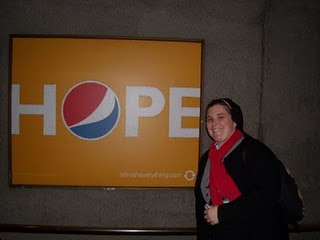 The group our parish traveled with was part of the “Life Really Matters” pilgrimage of 18 bus loads, 14 floors of hotel rooms and almost 1000 people. Being a part of this group was a powerful reminder that no one walks alone in the Pro-Life movement. The youth that I brought were connected with so many others from our area who share their values and even I saw plenty of old friends and acquaintances from all over the country. (We ended up marching right next to a group of priests and seminarians from my home state of Rhode Island.) If all of us gathered there, and the many who supported us in prayer and sacrifice, continue to persevere in standing up for life and keeping our hope in Christ, then, as Pope John Paul II wrote in his encyclical Evangelium Vitae, “Life will be victorious!”