Home on the Range - Timesharing with the Wildlife

August 06, 2009
It's that time of year again. The feastday of profession and reception is drawing near -- and the school year begins to gear up. Several of our school convents have begun to get in order for the new academic year, and John Paul II in Kansas is no exception. Sister M. Hedwig and I arrived Monday ... and began evicting those beasties who took up residence over the summer. 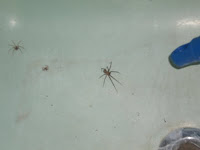 We have had an ongoing conversation with the wildlife about who really lives in the convent - sharing is not an option, even for Franciscans.

First it was the field mice and the squirrels. They really thought that our attic was the place to hang out on a hot summer day. Leaping and nesting, playing tag over the chapel and wandering through the walls was their particular joy, but we convinced them to find other places for recreation.

Then the tree frogs decided that a visit would be pleasant - one enterprising amphibian thought that leaping from the "choir loft" to the chapel proper would be the thrill of a lifetime ... and nearly gave me heart failure before Morning Prayer one day. They aren't that big, really, but they are so very unpredictable. 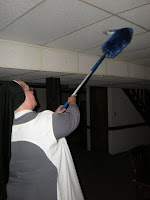 This year, it seems to be insects. The mammals and other larger beasts have sought other lodgings (and I am so very grateful that the deer, the turkeys and that skunk we encountered on Tuesday never sought admittance), but the wasps and spiders decided that the shelter provided was quite cozy. After a week of discussion, they have left - it took some persuading, but Sister M. Hedwig is persistent. 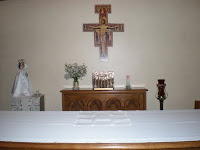 Of course, there are other parts to preparation. Tuesday morning, we brought Jesus home and set up the chapel, and today we were able to have Exposition of the Blessed Sacrament in the house for the first time this academic year. 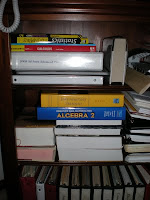 There are books to prepare and students to help ... and we are getting ready for the first retreat of the school year. The Juniors will leave St. James to spend time with the Lord in a week.

And it is all for the honor of God and the salvation of souls.

What else really matters?