August 20, 2009
Sr. M. Raphaele pictured with a quilt given
to her from her students. 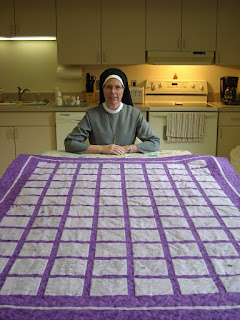 God works in mysterious ways. . . . After my high school graduation in 1972, I attended Saint Louis University. I met a young woman in my Math class. Her name was Jayne Goebel. We were both studying pre-med. Jayne was from Kentucky, so she lived in the dorm. I was from St. Louis, so I commuted every day. Two years later, I answered God’s call and entered our Community of the Sisters of St. Francis of the Martyr St. George, in Alton, Illinois. As a postulant, I returned to study at Saint Louis University. Once again, Jayne and I were in the same class, this time a Theology class. A year later, in 1975, Jayne also entered our Community. I was a first-year novice and my new name was Sister M. Anne. When Jayne became a novice, she received the name Sister M. Raphaele.
Sister M. Raphaele and I made Final Profession together on October 10, 1981, with Sister M. Ruth, Sister M. Clare, and Sister M. Petra. The five of us were very close and were known as “the five wise virgins.” In December of 2008, Sister M. Raphaele was diagnosed with cancer. She accepted this disease from the hand of God and heroically suffered for seven months. God called Sister M. Raphaele to Himself into His Kingdom of light and peace at the age of 55 years, at 1:00 a.m. on July 30, 2009. She died, strengthened with the sacraments of our Holy Church and accompanied by the prayers of her co-Sisters, in our Infirmary at St. Francis Convent in Alton, Illinois.
The following is my tribute to Sister M. Raphaele:
Sister M. Raphaele was born on June 11, 1954, in Covington, Kentucky. She entered our Congregation on August 26, 1975, made her First Profession on August 15, 1978, and consecrated herself forever to the Lord in Final Profession on October 10, 1981.
After her First Profession, Sister M. Raphaele received her degree in hospital administration and worked in this apostolate until 1990, first at Saint Anthony’s Health Center in Alton, Illinois, and then at McCarrick Care Center Nursing Home in Somerset, New Jersey. From 1990 to 1996, she was the manager of the Radiology Department at St. Anthony’s Health Center. In 1997, she was transferred to Sacred Heart Convent in South Amboy, New Jersey, and taught Science at Cardinal McCarrick High School until 2006. She was then transferred to St. Anselm Convent in Rock Island, Illinois, and taught Science at Alleman High School until 2008. In December 2008, when she was diagnosed with cancer, she came to our Infirmary at St. Francis Convent in Alton.
Sister M. Raphaele lived her life doing what she was asked to do with joy and enthusiasm. She loved being with her co-Sisters in community prayers and activities. She offered her many talents to her co-Sisters above the regular duties she was assigned. No task was too great for her to accomplish if it was helping a co-Sister.
Sister M. Raphaele’s keen intellect and quick mind benefited both our hospital staff and her students because of her willingness to share her knowledge with them. Her students were aware of her genuine interest in them and this motivated them to learn. Her sincere concern for them gave them the support they needed to face the challenges of their lives. The students realized her great trust in God and learned about their religion through her influence and example.
Sister M. Raphaele drew her strength from her daily prayers. She faithfully prayed her rosary before the Blessed Sacrament, entrusting her cares and petitions to our Blessed Mother. She relied on our Lord for everything as she completed her tasks throughout the day. She was always found doing what she was supposed to do at the moment, living out the Gospel: “It will go well with those servants whom the master finds wide awake on his return” (Luke).
During the last seven months of her life, Sister M. Raphaele embraced her suffering with her whole heart and did not allow any opportunity to pass without transforming it into something good for others. She continued to serve her co-Sisters in little ways. She faithfully participated in all community activities and continued to bring her joyful spirit to everyone she met.
Sister M. Raphaele desired to get better, but her health continued to decline. The doctors could no longer help her. During the last days of her illness, she abandoned her life into the hands of her Creator. At the time of her death, she was surrounded by her co-Sisters and her family. When the rosary was completed, she took her last breath.
Sister M. Raphaele’s religious life is expressed in the words of her favorite prayer which she prayed every day since the day of her First Profession: “Father, I abandon myself into Your hands. Do with me what You will. Whatever You may do, I thank You. I am ready for all, I accept all.” (Charles de Foucauld)
The Funeral Mass was on Saturday, August 1, 2009 at 10:00 a.m., in St. Francis Convent Chapel in Alton, Illinois. Burial followed in St. Joseph’s Cemetery.
“Sister M. Raphaele, thank-you for being such a good and faithful Sister. I know that you are helping our Community and your family from heaven. We will miss you.”

Anonymous said…
What a wonderful tribute to your friend and fellow sister. May God comfort your community and her family during this time of her passing. I'm sure that she is at the feet of her Beloved and watching out for all of you.
God Bless!!
Thursday, August 20, 2009

Anonymous said…
Dear Sister M Anne,
Thank you for writing such a wonderful, heart-felt tribute. Indeed Sister M Raphaele was blessed with the gift of His passion and so true of so many religious who abandon themselves to Him!
So there are now "the four virgins" carrying on the mystery of this religious gift He shared with you, your Community and we in the world. Thank you all for your witness!
Thank you Sister M. Anne for being the loving vessel to share this side of your Community with us!
a grateful reader
Thursday, August 20, 2009

martyrangel said…
Thanks Sister M. Anne for your loving tribute to our co-sister!
Saturday, August 22, 2009

Anonymous said…
Dear Sister M. Anne,
Happy 28th anniversary to you and the other "five wise virgins", Sister M. Ruth, Sister M Clare and Sister M. Petra. I am sure Sister M. Raphaele is interceding for you on this special day!

Thank you for sharing such an inspiring tribute to your friend.