February 04, 2012
“Christ Conquers, Christ Reigns, Christ, Rules…Eternal Victor, Eternal King, Eternal Master…His power is an everlasting power that shall not be taken away.”
While attending this year’s events marking the 39th anniversary of the tragic Roe v. Wade decision, heavy on my heart was the more recent decision of the Department of Health and Human Services that requires employers to offer insurance coverage for services that we as Catholics hold to be intrinsically evil.  I learned of this decision just hours before departing for D.C. and I knew that it would bring an additional intensity to the March for Life.
The experience of being in Washington, D.C. with so many others who come together to uphold the dignity of the human person is a source of strength and renewal, but decisions like the one handed down by the administration on January 20, so far-reaching, direct and hostile toward the common good and attacking our religious liberty can easily be a source of discouragement.
During my travels to Washington, D.C., I had the opportunity to attend the Vigil for Life at the Basilica of the National Shrine of the Immaculate Conception.  Most striking to any visitor to the upper church is the gigantic and intense mosaic of “Christ in majesty.”  I had a considerable amount of time and a privileged vantage point to really pray with the image when I arrived over four hours early to secure seats in the fourth pew for the Vigil Mass.  While some refer to the image as ‘Angry Jesus,’ I believe there is more to it.  In fact, through it, I experienced consolation and hope that, in the end, truth and goodness will prevail and, as Blessed John Paul II reminded us in his encyclical Evangelium Vitae, “life will be victorious.”
Looking closely at the eyes, one sees not anger, but rather eyes of both justice and mercy.  I saw Christ whose heart is still broken by our embrace of the culture of death.  It’s easy to blame it on political pundits and government officials, but the reality is, we feed the culture of death by our own sinfulness; and often times, our sinfulness is manifest by our silence in the face of grave evil.
I experienced conviction and a renewal of hope in my heart as I gazed upon this image, and then my eyes turned up toward the inscription that accompanies the image:

“Christ Conquers, Christ Reigns, Christ Rules…Eternal Victor, Eternal King, Eternal Master…His power is an everlasting power that shall not be taken away.” 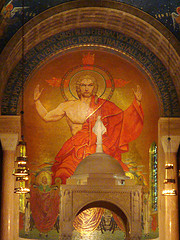 Ultimately, as we pray and fast in response to the HHS mandate, this fact we must keep in mind: Christ’s power shall not be taken away.  As I reflected on that fact, I could not help but feel reenergized to engage this battle and to passionately stand for the truth.  I am also grateful that ‘for such a time as this,’ the Lord has raised up shepherds ‘after his own heart’ who are not afraid to lead us into battle!  Thanks be to God for the courageous Bishops who are speaking out and leading the way for us as the people of God.  Let the battle begin under the standard of Christ who conquers!
- Sister M. Karolyn, FSGM