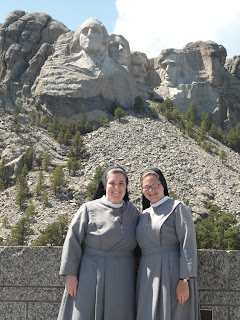 For almost a full fornight, Catholics across the United States have been in solidarity praying and fasting for the intention of Religious Liberty.   Last week, I was assigned to a summer program in Rapid City, South Dakota which afforded me the chance to once again visit Mount Rushmore.  I had seen the monument two years ago, but during this visit, there was more time to take in the museum and hike the ‘Presidential Trail.’  As I took it all in, I could not help but think of the special significance of visiting this great monument during the Fortnight for Freedom and my time there became less a tourist moment and more of a pilgrimage.  I felt the Holy Spirit moving my heart to intercede for each state individually as I passed by its respective flag and in a particular way, to pray for a return to the spirit of liberty and justice which was so alive in the hearts of our forefathers.


The very reason that sculptor Gutzom Borglum chose Washington, Jefferson, Roosevelt and Lincoln was to symbolize the principles of liberty and freedom on which our nation was founded.  As I took in the museum that accompanies the monument, I was struck by the video presentation and plaques that included quotes from each of these great forefathers which highlighted the importance of Religious Liberty and the meaning of the human person.


Whether from George Washington’s Inaugural Address, the Declaration of Independence, the Gettysburg Address or Teddy Roosevelt’s 1912 address at Carnegie Hall, it was clear that each of these men recognized freedom as the heart of who we are as a nation and as human persons.


When I returned to Alton, I was introduced to Father Felix, a missionary priest from Kenya who has been staying with our sisters and preaching at nearby parishes.  His experience in Africa is far different from ours.   He knows a great deal about our history and government as he learned it as a child not only in school, but also from his father who was a teacher.  He pointed out to us that America is the only nation that mentions God and that we must not lose that.  While he may have seemingly been preaching to the choir, it was a reminder that the whole world is looking to us.  So many come to our country desiring freedom, and yet that very freedom is at stake in so many ways.  We are so blessed, but we cannot be complacent.


When I learned last Thursday of the Supreme Court decision to uphold the Affordable Care Act, I have to admit, I felt defeated, like all of our efforts were in vain, and that we could just end the observances of the Fortnight then and there.  At the same time, I was fired up.  Here I was, in the midst of a summer program during which we focussed on sacrifice, laying down our lives, and learning the lives of great martyrs.  God’s providence once again inspired and encouraged me to keep fighting the good fight for the sake of true freedom.


As we wrap-up this “Fortnight for Freedom,” let us continue to walk with courage, speak boldly and pray intensely, living our earthly citizenship so as to gain our heavenly citizenship.
-Sister M. Karolyn, FSGM

CAS said…
Wonderful reflection! Reminder that we can't take all we have for granted. And if we are called "bigot", our Savior was called worse. Thank you. I shared on Facebook :)
Thursday, August 02, 2012

August 20, 2020
August 2 and 3 brought great joy to our community as we welcomed three new novices, celebrated the first profession of four sisters and the final profession of six sisters.  While the number of people gathered in St. Mary's Church was certainly smaller than we would have liked, we were blessed by thousands who joined the livestreams to join us in giving thanks to God for the gifts of our sisters.   Visit   www.altonfranciscans.org/feastday   to view pictures and videos of the occasion.
1 comment
Read more