“It was a dark and stormy evening…”  Stories that begin with this line are notoriously scary and perfect for sharing around the end of October.   At St. Elizabeth Convent in Somerset, NJ, the night of Monday, October 29 was our own ‘dark and stormy evening’ as we battened down the hatches and waited for the arrival of “Frankenstorm Sandy.”
The winds were picking up even the day before, and by Sunday evening, we already knew school was cancelled Monday and Tuesday.  Our original plan had been early dismissal on Monday and the chance to give our students assignments for the week ‘just in case’ the storm turned out to be as devastating as meteorologists were predicting.  Instead, we posted our lesson plans, handouts and assignments on-line and sent an all-call for students to access them as soon as possible since large scale power loss was expected.
As the day went on, we kept a close eye on the storm’s progress and heeded warnings to keep flashlights and candles handy along with a fully charged cell phone, a full tank of gas and plenty of canned foods.
Sr. M. Paula and Sr. M. Jessica were staying at the Priests retirement home in case anything happened over there, and Sr. M. Gabriela, Sr. M. Benedicta and I held the fort down here at the convent.  By 6:30 pm, the winds were whipping outside, but we were hunkered down with hurricane snacks and a movie.  (Hey, we still had power.)  Every once in a while, we would say, “We’d better do this or that before the power goes out.”  Time passed, and we never lost power, however the sisters and priests at Maria Regina were not as fortunate.  (A couple of days later, since the priests were still without power and heat, they were relocated to the Catholic hospital to be a bit more comfortable until things were back to normal.)
The most intense part of the storm arrived between 8 and 10 pm.  At that point, we had our beds set up on the ground floor of the convent where we planned to camp in case any trees decided to invite themselves in through the roof and we heard a loud and startling ‘thump’ in close proximity.  We cautiously checked the backyard and saw what looked like a large limb and some gutter damage.  It was not until the next morning that we saw the fullness of the “limb.” 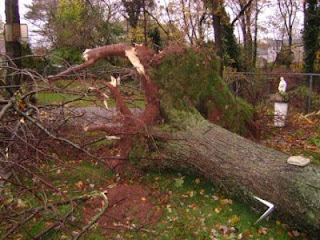 We woke in the morning to find that we still had power and that the “limb” was actually an entire tree that was uprooted and fell away from the house and took out our fence instead.  We spent Tuesday assessing damage here and throughout the local area, sharing stories with neighbors and starting to help each other clean-up yards.
Since our phone line, cable, and internet were all down, we were slightly cut off from communication and did not have a real sense of the full impact until a couple of days later when they were reconnected.   Even the area newspaper was not able to publish an edition immediately following the storm.  We did know that thousands were without power, many streets were impassable, and gas was a hot commodity.   The charged cell phone definitely came in quite handy.
The people of New Jersey learned to ‘make due’ in the days that followed the storm in the face of many inconveniences and even the tragedy of postponed Trick-or-Treating.  All Saints day was still celebrated though, and we were able to attend Mass at our local parish, albeit without lights, an organ, sound system or heat.  It proved to be a beautiful celebration of the liturgy marked by candlelight, simple chants, and the congregation huddled into the front part of the Church so that everyone could hear (and have a little warmth!).
The area where our school is located was particularly hard hit and a couple of our students lost their homes completely, still more are living with family until damages can be repaired and plenty of others suffered the effects of being without power for over a week.  Our school building was fine, but it took eight days to restore power and then we had a snow storm on top of it!  After almost two weeks out of the routine, we were finally able to resume on November 9 and are trying to get back to ‘normal’ as best we can.
In the midst of destruction and devastation, there has been a beautiful outpouring of support from neighbor to neighbor assisting in clean up and setting up relief efforts throughout the state and from around the country.  It was exciting to see Ameren utility trucks in our area all the way from Missouri!  People drove from Western Pennsylvania, Michigan and Indiana to bring supplies and volunteer at makeshift shelters.  As we celebrate the season of giving and remember to count our blessings, I think most of us in this area of the country are more keenly aware of the little things and grateful for what we have. 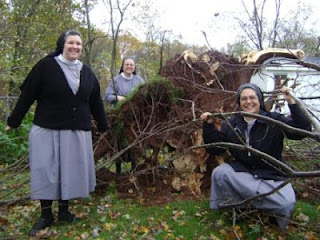 My spiritual lesson of this storm came in the hours leading up to her arrival.  I was struck by the paradox in directives given by meteorologists and government officials.  Those living by the water were encouraged to seek higher ground (see Colossians 3:1-2).  Those of us more inland in tree-laden areas were told to stay away from windows and move to the lowest part of the home in case a tree fell on the roof (see James 4:10).  High or low?  Which direction do I need to move in my heart?  Is it weighed down by distractions and the ‘stuff’ of the world?  Or do I confuse my role with God’s, placing myself higher than I should be?  The decision of one’s course of action is dependent on location and thus self-knowledge is indispensible.  All the storms of life that we face require some move on our part.  Which direction does your soul need to go in order to ride them out safely?