Standing on the Shoulders of Giants


Last Saturday, we had a special guest at St. Francis Convent: Justin Cardinal Rigali, cardinal emeritus of Philadelphia, and a long-time friend of our community.  Cardinal Rigali was invited to speak to the Sisters about his memories of the Second Vatican Council and memories of the work he did for Pope Paul VI as his English-language interpreter, as well as collaborations with other popes.  This was a perfect theme during this Year of Faith! 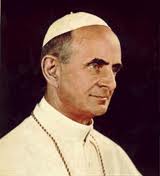 His Eminence shared many stories that showed the character of Pope Paul VI.  Among other virtues, one that stood out was his utter fidelity to the Lord Jesus Christ and his humility in exercising the authority of the office entrusted to him.  During his talk, I was struck by the thought that we stand on the shoulders of giants.  Perhaps it would be more accurate to say that we stand on a firm apostolic foundation, the one established by Christ!

Almost in confirmation of this idea, the next morning Cardinal Rigali reminded us of the importance of the apostolicity of the Church (i.e., the Magisterium) in safeguarding and transmitting the sacred deposit of faith handed onto us by Christ.  The apostles, and many of their successors after them, spent their lives in service of the Gospel of Jesus Christ, to the point of shedding their blood.  Without their sacrifice and witness, you or I would not know Jesus!  What should our response be to the gift of faith given to us by God’s grace through the ministry of the Church?  Gratitude is a good beginning.

William F. Buckley, commenting on ingratitude, wrote that to live without any sense of gratitude is “spiritually atrophying. “ The converse, then, must also be true: fostering memory of gratitude has the capacity to strengthen our relationship with God.  During this Year of Faith, take time to reflect on the many people who have helped to initiate or deepen your faith, both those whom you knew personally and the many more that you do not know.  You will find that you too, are standing on the shoulders of giants.