May 01, 2014
I was born three years after he was elected.  I was a teenager when he came to St. Louis in 1999.  I was a young adult when he died.  Until I was 24 years old, he was the only Pope I knew.  Now he is a saint.  On Divine Mercy Sunday, one of my favorite feastday because it emphasizes God’s unbounding love and desire that all would respond to that love, I rejoiced with the Church as Pope John Paul II was canonized alongside Pope John XXIII.  It was an occasion on which I was renewed in gratitude for the gift of the name given to me when I was received into the community.  He was not even beatified when I received the name, but we all knew it would happen sooner than later.  I wanted to be named for a zealous, missionary catechist.  He was not the first to come to mind, but after my initial ideas were rejected, it became clear that he fit the bill.
In the nearly eight years I have borne his name, different aspects of his life and teaching have struck me but I consistently return to one phrase, echoed countless times in his speeches and homilies: Be not afraid.
Given his life experiences, no one would have blamed him if he were afraid.  He experienced loss, loneliness, war, being elected Pope (probably the scariest moment) and an attempt on his life.  Yet he knew “Him in whom He trusted.”  Christ was his sole hope and that witness gives me courage.   His difficulties were never used to justify mediocrity or as an excuse to give up.  He carried his crosses to the end and he did so with love for us, imitating Christ’s sacrificial love.   He carried his cross and he won the crown of life. 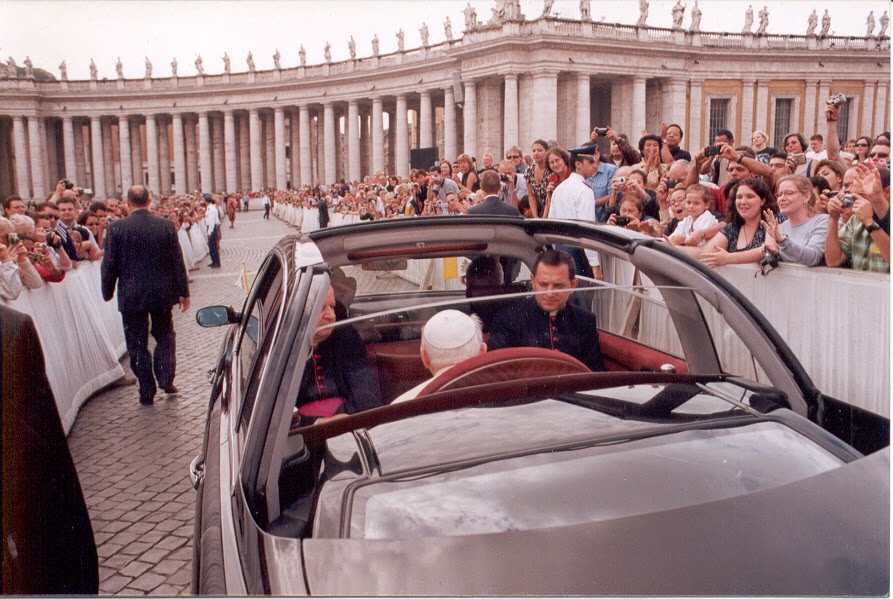 He is a hero, but an ordinary hero.  He chose to become better rather than bitter.  Even what seems extraordinary (ie, taking down communism), was accomplished because he cooperated with God’s grace.  All of us have what it takes to become a saint, an ordinary hero.  We just need to do it, forsaking excuses and shortcuts.  Inspired by our newest saint and assisted by his prayer, it seems a bit more accessible to me.   Sunday’s celebration was a reminder of what happens when we cooperate with Divine Mercy.
My connection with Pope John XXIII is not as intimate as my name, but he looks out for me all the same.   From the time I was a young child spending the night at my grandparent’s house, he was watching over me, literally, from a framed picture that hangs on the wall of my father’s boyhood bedroom.  I did not know who he was until I was in college, but when I learned more about him, his life, papacy, and contributions to the Church, I was glad to know that we were old friends.  I was also excited to learn the day on which I was baptized, October 11, is the anniversary of the opening of Vatican II and observed as his feastday.
Both of our new saints radiated the joy of Christ through their humor and in the manner in which they encountered each person with whom they came in contact.  They used all that they were for God’s glory and now they share it with Him.  May we all one day join those same ranks in the Ocean of Mercy.
- Sister M. Karolyn, FSGM