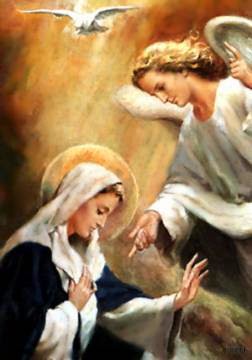 During this Easter season and this month of May devoted to our Blessed Mother I have been reflecting on the Easter Vigil homily of Pope Francis. In the Gospel he recounts how the women told the disciples Jesus’ command, “to go to Galilee, and there they will see me.” He goes on further to describe the significance of their return to Galilee. “Galilee is the place where they were first called, where everything began!”

Where did everything begin for Mary? What was her Galilee? I returned with her to the moment of the Annunciation. It is the beginning of Mary’s vocation as the Mother of God. Her yes leads to the indwelling life of Jesus within her and the call to go forth and care for her cousin Elizabeth. This has led me to return to my own moment of saying yes to become a Sister and the new life I received in following the Lord’s will, which is the message of the Resurrection. Now may you ponder these questions which Pope Francis gives to us “What is my Galilee? Where is my Galilee?”
- Sister M. Caterina, FSGM