Death in the Family: A Tribute to the Cardinal McCarrick High School Family

July 21, 2015
When a former student of Cardinal McCarrick High School and friend of our community told me about the closure, I felt a sense of death, was very saddened, and started grieving.  You see Cardinal McCarrick High School was like a family.  I grew up as a teacher there and was blessed to get to know both staff and students, people I will never forget.  The building has closed, but the family does not end.  130 years is a legacy and I was blessed to be part of the last decade and our congregation part of the last 30.  First I must say Thank you for the beautiful memories and lessons learned that I will cherish for a lifetime.
I remember when I visited my grandma the last time.  She was 95 and had lived a good life; traveled the world, enjoyed golfing, watching tennis, and every once in a while a good game of backgammon with her granddaughter.  She was not Catholic like me but she said she was the proud grandma of a nun.  It was not an easy visit, partly because she was constantly in pain and this is not how I had ever experienced her, but mostly because I knew this would be the last time I would see her and be able to speak to her.  The most agonizing moment actually was having a delayed flight and realizing I could have spent at least another hour with her.  Time is precious and sometimes we do not realize what we have until it is gone.
But in this case, I had realized the gift I had at CMHS as I left.  The people were wonderful, a true family, working together, supporting each other, listening, loving, learning and laughing.  There were tough times of course but that is what makes a family even better – sticking together, helping each other out.
Sometimes mementos or souvenirs help us remember special times or people.  When I was stuck in the airport I found a sea otter and cub that now remind me of my grandma, and since I have animals in my science classroom, I can even talk about her when I share the significance of the sea otter and why I want it to be treated with respect (less roughness on the part of the guys).  I have an eagle, the mascot of CMHS, that can remind me but I think the greatest reminders are of the people and adventurers had are written on my heart. 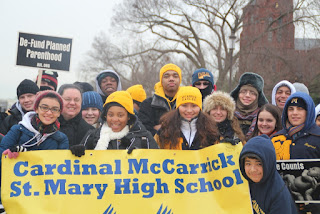 A photograph helps us remember those who are important to us but old time photos are put in a box or an album that we rarely open, and now phones (which I do not have or need) have these collections but only small digital captures of time.  I remember our German Reverend Mother, while visiting the U.S. years ago, took time and slowly looked at everything.  She was taking pictures with her mind.  I have learned since that she takes pictures (as I do) but that action of hers back then really impressed me.  Let not time pass us by, take in the moments, enjoy and savor, like prayer which is taking time to listen, to soak in the graces, to be open to what is offered and not to be too quick as to miss the opportunity given.  So I will remember the people who have gone before me and the school family I was blessed to be part of.  I am happy to have some pictures of precious moments, like the March for Life trips with all the students who were passionate about life, the adventures of Science Club, and my Canada wall (a collection of animals and scenery that captured by beloved home near the Rocky Mountains so thank you Angela for painting the masterpiece and Carlie for photographing the wall so that I could bring it to Illinois), but I am thankful most for the impressions these and many blessed times made on my mind and heart. 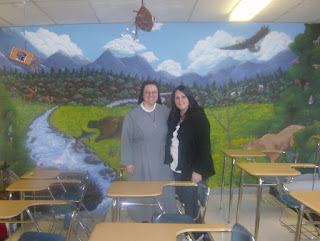 It was said to me more than once that teaching in New Jersey is tough but I never received anything but respect, acceptance, and love.  I think I prefer students who are a little rough on the edges and challenge is good for the soul.  I do not wear a badge that says I can teach anywhere now; I have a heart that says hold nothing back!
The day I found out about the school closure, I asked each of my classes at Alleman High School in Rock Island to pray for the school I came from.  They had heard many stories as I had talked about Jersey a lot when I first moved to Illinois.  In one class after our prayer, a student said “You are part of our family now.”  What a beautiful thing to say.  I know he meant it and sensed the grief I was experiencing.  Teaching in a Catholic school is a privilege and a blessing.  Parents entrust their children to you and I have experienced nothing but generosity from these people who already sacrifice so much to have their children in a Catholic school.
I had to write this, like unfinished business, not a eulogy but a tribute to all the people that made an impression on me and to all whom we had an impact on each other.  Praise God for the opportunity!  Grief takes time.  It has been six years since my grandma died, and I remember her and other loved ones as if they were still here with me.  My beloved Cardinal McCarrick family keeps surfacing in my mind and will always remain in my heart and prayers.

Kristin Boczany said…
That was beautiful Sister. Thank you for all of the amazing memories!
Tuesday, July 21, 2015

Unknown said…
I miss you Sister Benedicta! We all do; visit some of us at Bishop Ahr ( where i will attend along with brinn and robert) and the rest at Mater Dei Prep. God Bless you.

Lauren O'Connor said…
Beautiful article Sister Benedicta! I attended CMHS and graduated in 2006, and I had you as my Biology teacher. You were just as amazing as the memories you remember. Thank you for this tribute, and for putting a positive spin on a relatively negative situation!
Monday, August 17, 2015