Living in the Truth

October 05, 2015
"The Universal Church" This is a saying that I have heard many times. While I have experienced the fullness of the Church many times, none of my experiences have touched me in the way my trip to Philadelphia to see the Pope did. I was asked the question by a woman while I was in Philadelphia, "How does the Pope being here affect you as a religious?" The only answer that comes to my mind is: He brings us together! And he does, at least 1-2 million of us! As head of the Universal Church he not only leads us and guides us, he reminds us that we are part of something that is much bigger than ourselves. As religious, we are daughters of the Church and the Holy Father is a member of our family, the head of our family. 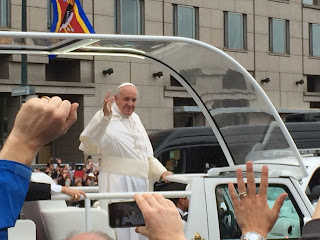 Each of us has a thirst for truth whether we realize it or not. The Holy Father is known as a spiritual leader by Christians and non-Christians alike. The whole world listens to what he says. Hearing him and seeing him brings home that desire to live in the truth and be the person you know you should be. For me personally, this experience was a reminder of what I am called to as a consecrated religious.  I am called to be a witness to the world of what truth looks like.  I talked to another woman in Philadelphia.  She was there as a reporter and was a fallen away Catholic. During the course of our conversation she shared with me how seeing the Holy Father and listening to him has given her the desire to come back to the Church and to have her two children baptized.  I believe that it was the feeling that the pope has made Catholicism "real" to her that allowed her to take this step. 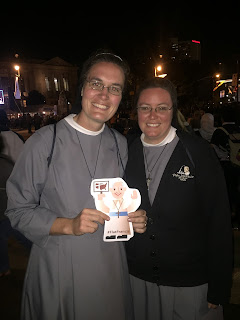 In 1993, when John Paul II came to Denver for World Youth Day, I was living near Denver at the time and the Pope's motorcade went right by me.  I was only about 20 feet away. Sadly, at the time I was not Catholic and had only a vague understanding of who the Pope was. It was only after my conversion that I realized what an opportunity I had missed. World Youth Day was in my backyard and I missed it! In some ways my time in Philadelphia was the redemption of the chance I missed in Denver.

I was stationed in Philadelphia 2010-2011.  While it is a beautiful city with a very rich history, it was not as friendly as a small town in the Midwest would be. While on this pilgrimage, many natives to the city remarked to me that there was a different spirit in the city since the pilgrims and the Holy Father had arrived. To quote one woman selling Pope buttons on the side of the road, "The peace has come and I hope it stays."

The trip to Philadelphia from La Crosse, WI where I am currently stationed, was 24 hours by bus. It was long and exhausting, a true pilgrimage. But while walking around the city of brotherly love I truly felt that it had all been worth it. The memories, and hopefully the intention to be the person I should be, will last far longer than the discomforts of a long bus ride.