DRAWN OUT of the Well Springs of His Sacred Side

March 25, 2016
Lent is a time for all of us to look to Jesus Christ crucified and receive His mercy which is DRAWN OUT of the wellsprings of His Sacred Heart.  This year I believe is especially graced as Pope Francis has declared this an extraordinary jubilee of mercy.  Each of us is invited to stand with Mary, the mother of mercy, at the foot of the Cross as she gazed upon her Son Jesus with tenderness and open ourselves to all the graces that have overflowed from His pierced side: the source of mercy.  As Catholics, we have the incredible gift of the Holy Eucharist in which we receive His Precious Body and Blood, which was shed for our sins at Calvary.  During the consecration, we should call to mind this reality and place ourselves with Mary at the foot of the cross as the Eucharist is elevated.  St. John Marie Vianney proposed a question that goes perfectly with this idea, he asked: “are you there at Mass with the same dispositions as Our Lady on Calvary, realizing that you are in the Presence of God Himself, and are present at the enactment of that very same sacrifice?”  So I would like to ask all of us:  are we truly present to this mystery before us just as Mary was to Jesus at Calvary?
If we are, then what does it mean for how we live out our daily lives?  It should radically change us just as it did Mary and the Beloved Disciple when they witnessed the Crucifixion of our Lord.  Jesus spoke to them with such tenderness as He uttered the words “Behold your son” and “Behold your mother”.  These words spoke to the core of their beings, their true identities and stirred their hearts to go out and carry the love they received when Christ commended Himself into the hands of the Father and His sacred side was pierced.  The love they had received did not allow them to stay as they were before the crucifixion, because it penetrated their hearts so deeply and drew them out into mission. 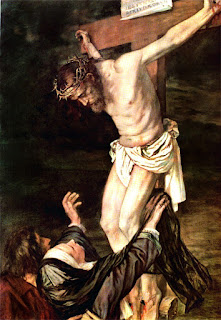 Like Mary and the Beloved Disciple we must be DRAWN OUT and take the graces received from the Mass and bring Jesus’ pierced heart of love to all those we encounter.  We can look to Mary’s example as she left the hill of Calvary.  She was DRAWN OUT to be a mother to the Apostles and all the faithful.  Her identity as mother didn’t end at the death of Jesus, but was transformed into something different, something very beautiful.  This happened because of her openness to the Father and trust in His will.  She received all from the Father in love including her Son and was able to give Her Son back to the Father in love as well.  She could not keep the love for Her Son to herself, she had to give it away to all those who came to her.  Do we as Catholics do this?  When people encounter us do they receive the merciful love of the Father poured out through the Son?   Do they leave our presence knowing the love of the Father or do they leave us feeling unwanted and unloved?  They should leave our presence feeling deeply loved just as the disciples did after being in Mary’s presence.
Each of our daily encounters with others is to be seen in light of the Pascal mystery in which we allow ourselves to be drawn out by giving fully of ourselves just as Mary gave of herself to John and the Apostles after the death of Her Son.  Are we open to the Lord allowing Him to transform us and use us as He wills not holding anything back for ourselves?  You may wonder if this is even possible.  This is possible when we call to mind the Lord’s presence dwelling within us frequently throughout the day and allow it to penetrate into every one of our actions.  At the conclusion of the day we can examine our hearts and minds, and ask the Holy Spirit to show us how we spent ourselves for souls that day and also where we are still lacking.  When we exhaust ourselves for souls, we can rest in the arms of Mary, who in turn gives us over to Her Son.  We are then restored for the next day in which we will return once again to the foot of the cross at the consecration, receive the Lord’s mercy and then be drawn out again to go and be a witness of mercy to the world and bring many souls to the Father’s heart.
- Sister M. Dolorosa, FSGM