My Mission: Giving Drink to the Thirsty

Sister Maria Teresita, a second year novice, shares about her experience being on mission.

“Give Me a drink... If you only knew the gift of God and Who it is that is saying to you, ‘Give Me a drink’, you would have asked Him, and He would have given you living water.” Jesus repeats His longing on the Cross, “I thirst.”  This is what Jesus kept telling me during my 5 months on Mission. What is He thirsty for? He thirsts to love, forgive, strengthen, and fill us – Jesus thirsts to satisfy our thirst, for that is what we thirst for too. But how do we let Him do that? Jesus said “If any man is thirsty, let Him come to Me”, so that is exactly what I did; I went to the foot of the Cross, and “looked upon Him, whom I have pierced.” I fixed my gaze on Him, whom I’ve wounded, and I was filled with hope, for as I looked into His merciful eyes, I only saw love, compassion, and forgiveness. Remaining in His loving gaze, He filled me with overflowing graces in the form of Blood and Water coming from His pierced Heart. What beautiful mystery; as I quenched His thirst, He quenched mine… if we only truly knew the gift… 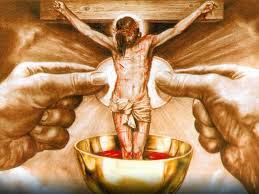 It was a privilege to work and take care of the chapel, God’s house, for the first 2 months, like Mary did. Every time I cleaned something, or ironed linen, I did it with love, with and for Him, to quench His thirst. And most beautiful and breathtaking, was to set up for Mass, which is the source and center of our life, and having the privilege to literally give the Most Precious Blood of our Lord (that flows from His side) to my co-sisters. 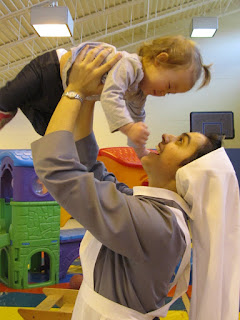 At the daycare, from the moment I walked in, I was bombarded with silent cries of thirst from babies, toddlers, pre-schoolers, and the staff! Except when the babies cried for a bottle, or toddlers said the only word they knew, “more!”, while waving their cups, no one told me “I thirst”, or even “I need love”, for love is what we all thirst for. It was a silent cry. I received the grace to “hear” it in their moodiness, complaints, naughtiness, or disobedience. Since I had received the love they thirsted for, by gazing on Him (in the Eucharist), I became a simple channel of His love! I was able to make it visible to others and quench their thirst by lending a listening ear, giving a smile or a hug, or doing an act of service.  Sometimes, the same way that Jesus died for me to quench my thirst, I sometimes had to die to myself to quench other’s thirst; when I was exhausted, for example, that was the moment when a child wanted me to run after him and catch him, which would later turn to them running after me!

Now, I miss being at the daycare, and I think that the greatest reason is because I can’t quench their thirst.  But I can! It is not my love that they were receiving but Christ’s.  I was only a little channel and I can still be one by offering my prayers and sacrifices for them. And it really is to Jesus that I return this love, that I give a drink, for it is His silent cry that I heard in others.