March 07, 2016
Much of the theme of Lent is about being drawn into the desert. Indeed, this is one of the premises upon which the Christian life is based upon. And it is that which religious life is based upon. Even today in religious life we still draw much of our being and purpose from that which was started by the desert fathers and those who sought solitude to find God within the desert.
Yet, at the same time I would say that in some ways that the internal desert is an even harsher reality than the external environment of the actual desert or mountain. An article I once read spoke of how St. John of the Cross despite never seeing the desert could more accurately explain it than others could. This is because he took the journey that so many of us whine and stuttered at and try to bargain with God about. He was willing to say words to the effect of; God, I give you permission, take over my life. And in doing so he entered into the edges of the environment and harshness of the soul that he never could have done on his own; that which is so often exemplified in the actual harshness of a geographical desert.
For me, this is something which I often stare in the face of and try to go the other way. In some ways, I would willingly say pit me against the physical desert. I don’t know anything about survival within one and likely would fail miserably. However on the reactionary level it sounds better than entering into my own internal battle and willingly giving God the permission to enter into the wounds that I want to control or even prefer to let fester and deny their existence. Nor do I want to admit how they have shaped much of my reactions in my life and the barriers that I have erected in my interactions with others.
As beautiful as religious (and Christian) life is, in a very real way it causes us to enter into that desert.  It’s a call to lay down the very struggles that often define me. To find true freedom, I need to let God into those place that I don’t want to because of the pain that is there. As a religious community, each of us are human and have our own backgrounds and brokenness. Often it is the choice to daily enter into the life we have vowed which causes us to also encounter the broken edges that we have not allowed God to heal for in our human nature we try to control that which in reality is not ours to control. 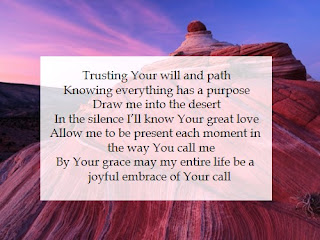 As humans each of us carry both the grace which God intended us to have before the fall and the rebellion and weakness which entered into our nature due to the fall. So much of what I personally view as the theology of the desert to be is to enter into that battle. It’s a choice to courageously enter into the battle to lay down one’s will and fight to accept the peace, freedom, and love that God wants to hand us if only we allow Him. However; to do that we have to learn to accept the pain and allow God to fight for us and take over our lives. This for me is the beauty of the Cross and Christ’s agony in the garden. The cross is both humanity’s most gruesome moment and most beautiful moment. It is the moment of the absolute darkness of humanity’s soul being conquered by the absolute light of God’s love for us; manifested in the Son laying down His life for us, for me.

Two of my favorite scripture passages speak to this reality. Isaiah 30:15, “In returning and rest you shall be saved; in quietness and in trust shall be you strength.” And Exodus 14:14, “The Lord will fight for you, and you have only to be still.” For me this is the essence of my daily battle in the desert. The choice to allow my baser nature to have control; to doubt, to fight God; and to constantly allow the lies that the devil has breathed into me to take control and direct my actions. Or the choice to abandon myself to God and trust Him in my life. To choose to believe that which I know in my heart to be true and allow Him to give me the freedom I desire.

A battle that if I’m honest I most often I prefer not to enter into and still haven’t fully reached the point allowing to come to the climax I know it one day will need to reach. One which means I need to allow the persona and projections I’ve carefully fostered to be released and instead allow God to shape me into who I’m truly meant to be in Him. For me, that is what the call to enter into the desert is all about, allowing God to have total control and trusting His lead.